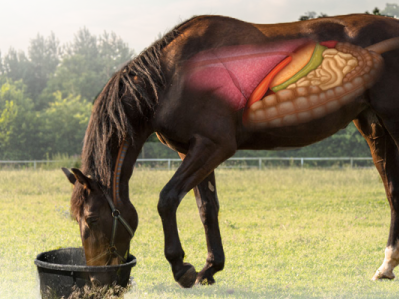 A study carried out by scientists at Massey University in Palmerston North, New Zealand, set out to examine if feeding controlled fermented (CF) lucerne (Chaffhaye) in replacement for hay resulted in improvements in energy digestibility when fed alongside either high grain racing diets or competition feeds for horses. The scientists studied the effects of fermented lucerne (alfalfa) on secondary feeds, in this case, grain and oats. Every seven days fecal samples were taken to analyze the digestibility of the diet. What they found was impressive: “Retained energy (MJ/d) increased by 26% from 69.3 MJ/d (100% hay) to 87.8 MJ/d (100% CF lucerne). Digestible energy supplied by the whole diet increased by 8% from 12.9 MJ/kg (100% hay) to 14.1 MJ/d (100% CF lucerne).” Not only was the (CF) found to be more digestible than dry alfalfa but it actually increased the overall digestibility of the grains as well! Just another reason Chaffhaye is the optimum forage for your horse

To view the study visit the link below.

A comparison of Chaffhaye and alfalfa hay on digestibility and glucose metabolism in mature, stock type horses